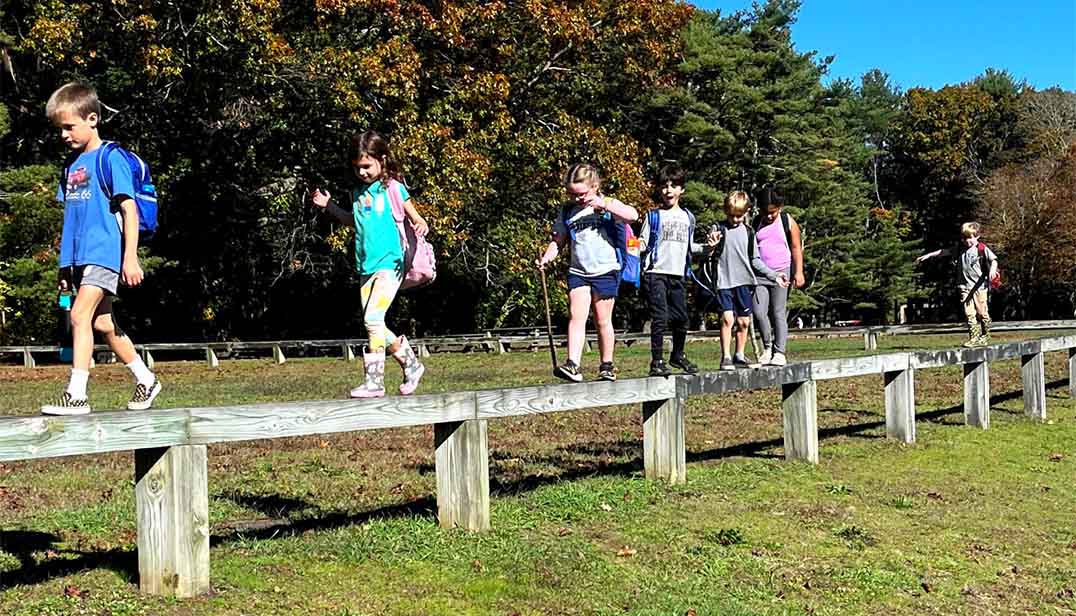 Deeper learning looks like our 2nd graders walking to Goddard Park using maps, compasses, and the sun to determine their direction. A precursor to the wilderness and backpacking trips they will take once they reach our Upper School!

What is a rigorous academic education? This is a discussion I’ve been having with fellow educators for my entire career, and in particular consideration of the tension between rigor and volume. Too often, hefty reading loads, endless worksheets, lengthy teacher lectures, or extreme memorization tasks have been viewed as ‘rigorous.’ Students’, and families’, perceptions of rigor often reflect this definition, as well, though research suggests it’s not necessarily accurate.

A recent 2019 Harvard study “compared students’ self-reported perception of learning with their actual learning under controlled conditions in large-enrollment introductory college physics courses taught using 1) active instruction (following best practices in the discipline) and 2) passive instruction (lectures by experienced and highly rated instructors). Both groups received identical class content and handouts, students were randomly assigned, and the instructor made no effort to persuade students of the benefit of either method. Students in active classrooms learned more (as would be expected based on prior research), but their perception of learning, while positive, was lower than that of their peers in passive environments.” Ultimately, the researchers concluded that “compared with students in traditional lectures, students in active classes perceived that they learned less, while in reality they learned more.”

At RHCD, I believe we define ‘rigorous’ in line with the Harvard study. Here, we focus on active, deeper learning, the kind of learning that endures for students, and builds their intellect, compassion, and creativity, leading to a sense of agency to make a difference in the world.

In terms of staffing, one general way we continue to evolve our efforts to bring deeper learning to students is through the creation of our Instructional Facilitator role, filled by Wendy Gustavel in addition to her role as Librarian. This role is the next iteration of the Director of Innovation position, focusing more on teaching and learning. With a significant background in teacher training and inquiry based learning, in addition to her Masters in Library Science, Wendy works with teachers to develop their curriculum for maximum impact for students. This year, alongside our student leaders and other faculty, Wendy is guiding our 5th Hack for Global Good. Excitingly, this year’s H4GG will involve the entire RHCD student body! Stay tuned for more details on this signature Rocky Hill event in March 2023.

In terms of pedagogy, there are many real time examples of ways our commitment to deeper learning plays out in classrooms.

Deeper learning starts with the Harkness table. We should not take for granted the strength of this experience as students develop from simply listening to listening to understand, and at the same time discover a voice to participate in intellectual conversations. As we teach our students how to think rather than what to think, Harkness discussions are an invaluable tool. Our graduates routinely tell us how their time around the table forged their ability to engage in meaningful ways with peers and professors when they get to college, particularly in comparison to their peers from other schools. 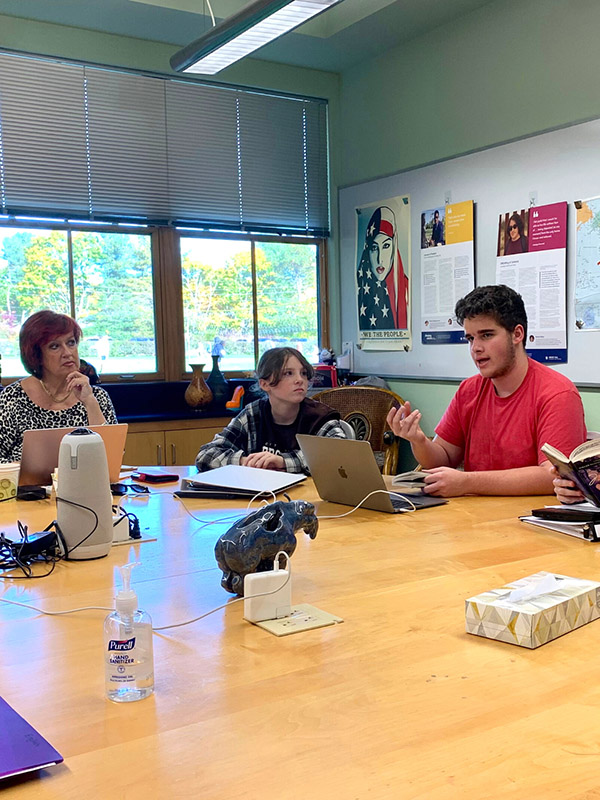 Upper School students around the Harkness table engage in meaningful conversations with peers and professors. At RHCD, students learn how to think rather than what to think.

Deeper learning looks like our 2nd graders walking to Goddard Park to practice mapping and directional skills, using compasses and the sun to determine which direction they were walking. Along the way, they also explored local insects on the wooded trails! This work is a precursor to the wilderness and backpacking trips they will take in our Upper School when they get there! 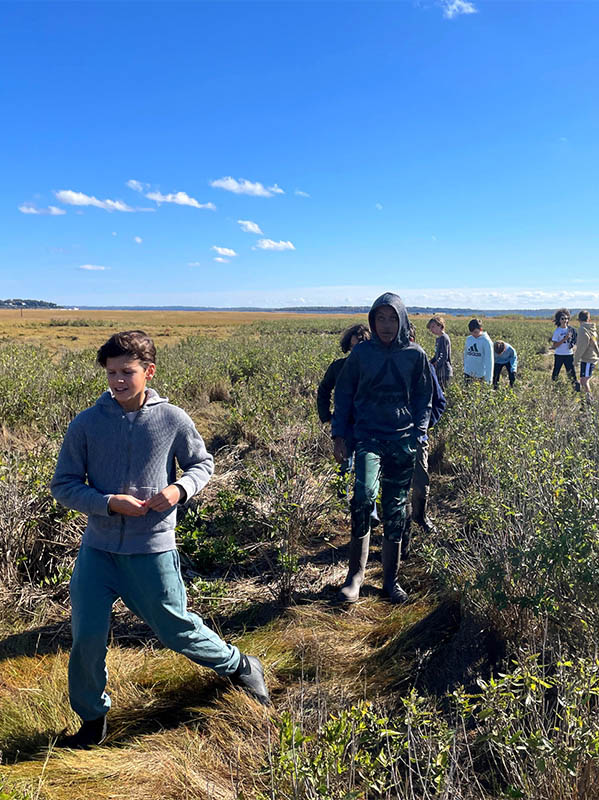 7th graders spend the first six weeks of science class studying the salt marsh, conducting experiments on the invasive Phragmites australis, and preparing to work with Save the Bay on conservation efforts next Spring 2023!

Deeper learning looks like the 7th graders spending the first six weeks of science class studying the salt marsh from all aspects, ending with an experiment on the invasive Phragmites australis. They will be poised to work with Save the Bay as our conservation efforts begin in the marsh in the coming year! And in an increasingly fractured political climate, our 8th grade Government class does the important work of researching the backgrounds and positions of our state candidates from all parties for the upcoming midterm elections as they learn to sort through rhetoric to consider issues at the heart of our democracy. Developing thoughtful, independent thinking citizens is one of our core Student Competencies.

Deeper learning looks like our Intensives course structure in the Upper School. Focusing on 2-3 academic classes at a time allows students to delve thoroughly into topics. For example, Psychology students designed and implemented original experiments, such as how weather affects mood. One student recently reported, “The class encourages learning by making connections to our own lives, interests, experiences, etc., which I think is great for a psychology course and electives in general, and makes the information both more impactful and more easily remembered.”

Deeper learning for 10th grade Humanities students involved the essential questions: “How does place impact an individual and society? How do society and an individual impact place?” Among the many things they learned, one student shared this reflection: “There was a lot I needed to be aware of, such as the history of the factories I pass by so often, and the opportunities within the

community. From the interviews, I recognized the real power behind hearing from the people in the community, their stories, and their opinions.”

So at RHCD we are redefining what a ‘rigorous’ education looks like. It pushes students to think critically, to ask questions, to analyze original data, to express their opinions and their learning in productive, articulate ways.

It’s a set of skills perhaps best appreciated after the fact – just ask our recent graduates! 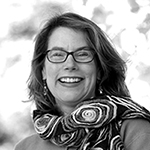 Rocky Hill Country Day School is a Preschool to Grade 12 independent school accredited by the New England Association of Schools and Colleges.

Rocky Hill Country Day School stands firmly behind the principle that the admission of students, the employment of faculty and staff, the operation of programs, and the governance of the School be open to all who are qualified regardless of race, creed, color, national origin, ethnic origin, or sexual orientation.

If you have any questions, or would like to know more about Rocky Hill Country Day School, please fill out the form below.